Published on December 21st 2018 by staff under Tribe Facts

The Kiowa tribes are of a Native American descent that migrated from the Rocky Mountains area in Colorado in the 17th and 18th century to the Southern Plains in the 19th century, finally settling in the reservations of the southwestern parts of Oklahoma. Being federally recognized as the Kiowa Tribe of Oklahoma, the community at present have retained their traditions but at the same time progressed to make a mark for themselves in different walks of life.

Meaning of their name

There have been a lot of theories regarding the origination of their name. They would refer to themselves as Gaigwu, Ka’igwu, and Cáuigu. The first part of their names could mean mother or a kind of feathered spear in their local language. The second part, i.e., gu or gwu refers to people or men. Their name in totality may thus mean the Chief People or Principle People. 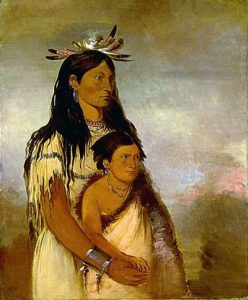 The Kiowa community is a part of the Kiowa-Tanoan language group which comprises a series of dialect in which the indigenous people living in Kansas, New Mexico, Oklahoma, and Texas speak. The language has a host of interesting words, for instance, “hacho” is known to be a friendly greeting. Presently the language is at the risk of endangerment since the Kiowa kids are no longer learning it and most of the people of the community have taken to the English language. Efforts are on by members of the tribe to revive and restore the language.

The symbol present on their flag is that of a seal, placed against the background of a field, sky blue in color. There is also a warrior mounted on an Appaloosa, circled by a wreath comprising of white and black eagle’s feathers. 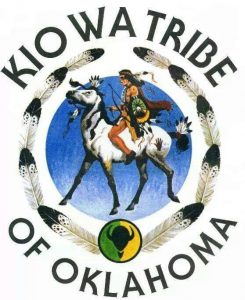 History and Origin of the Tribe

Being a part of Kiowa-Tanoan language group, this tribe may have in the prehistoric times, shared their descent with other Amerindian nations from the same family.  This tribal group initially had their homeland in the northern part of the Missouri River Basin. In the search for more magnificent lands, they traveled to the southeastern region of the Black Hills situated in the Wyoming-South Dakota region. Here they were coexisting peacefully with the Crow Indians but pushed southwards by the Cheyenne tribal group who had invaded them. Gradually, they began moving along with their dogs from one place to the other until they obtained horses through trading as well as raids.

In the first half of the 18th-century members of the Kiowa community under the leadership of Guikate made an offer to enter into a peace treaty with the Comanche group when they had gone to visit a friend mutual to both the tribes. This led to a strong alliance between the Kiowa and Comanche, and both the tribes shared a common hunting ground, also participating in one another’s meetings and events. Their alliance made them great powers helping to combat the Spanish invaders and establish a monopoly in the Southern Plains.

During a war in the summer of 1833, the Osage Indian tribes attacked the Kiowa people killing many. After a series of battles for survival, they finally went on to settle at a reservation situated in the southwestern part of Oklahoma which lasted between 1868 and 1906. Quaker Thomas C. Battey went on to establish the Kiowa people’s first school in 1873.  They were also included in the list of the 30 Indians hired for the formation of the early police services in the reservation. Their status has changed at present, and since 1968 the Kiowa Tribal Council has been governing them. 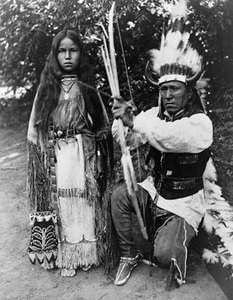 Where are they located at the present

By 2011, the tribe had about 12000 members most of whom were located in the Fort Cobb, Anadarko and Carnegie areas in the Kiowa and Caddo counties.

The Kiowas were a group of hunter-gatherers who mostly depended upon the food available in the wild. The menfolk engaged in hunting, with the American bison and buffalo being their prime games. Initially hunting a bison was a tedious process as the person had to mostly tread on foot to reach its game and shoot it the moment he was close to the animal. However, after they acquired horses, the process became easier as they could mount on horseback equipped with bows and arrows and get after their prey. They consumed the bison’s meat in its boiled, roasted or dried form. The dried meat was used for preparing pemmican that they ate while roaming around to gain energy. Besides the bison, they also ate the meat of elk, deer, wild turkey, bear, pronghorn, and wild mustang. When there was scarcity in big games, they even resorted to eating lizards, skunks, waterfowl, snakes, and armadillos. In fact, at times when they had no food at all, they even consumed their own horses and camp dogs as well as mules. 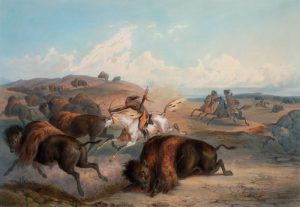 They also ate a lot of vegetables and fruits like prickly pear, acorns, mulberries, pecans, plums, persimmons, wild onions, berries, seeds, and tubers, most of which were collected and gathered by the female folk. Crops like maize, pumpkin, and squash that was majorly acquired by trade also formed a major part of their diet.

These warring and hunting tribes used weapons like bow and arrow, clubs made of the jaw bone and stone balls, spears, axe, hatchet, knives, and lances. While fighting on horseback, they used shields mostly made from the hide of bison. During ceremonies or special occasions, the shield had decorations of furs feathers and eagle claws. After the European traders and settlers came, they started using modernized weapons like revolvers, shotguns, rifles and cavalry swords.

They lived in homes resembling tents, known as tepees made with wooden poles of an increased length covered with the hides of buffalo and other animals they hunted. It had a round base while the top was tapered opening into a smoke hole. The center of it had a hearth for food to be cooked and heated. This kind of arrangement was well suited for these nomads. However, at present, they have shifted to modern and concrete establishments. 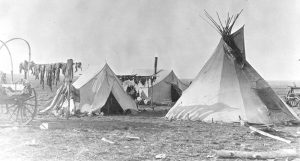 The men were mostly dressed in breechcloths during summer and went without shirts, however, in the colder months, they clad in fringed tunics, shirts as well as leggings mostly made from animal hides. Robes and cloaks of buffalo skin were also worn in the rainy season and winters. The warriors often dressed in bonnets decorated with beads and eagle feather to showcase their bravery. They also wore caps for their headdress decorated with eagle feathers and ermine tail.

Women wore dresses to the length of their knees as well as leggings. Both the sexes decorated their clothes with beads which were painted with many signs as well as symbols.

Most of them have taken to modern outfits like vests, jeans , tees and only clad in their traditional attires during ceremonies and special occasions. 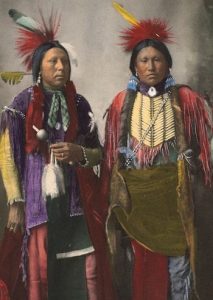 Both men and women maintained long hair that was only cut while mourning. The men mostly braided their hair that was sometimes covered with fur and often kept a forelock. Women, on the other hand, wore two braids that were adorned with beads. Hair pipe, a long, thin bead of a cylindrical shape, was one of the most common jewelry used for decorating the hair.

Prior to the horse being introduce dogs were the main mode of transport. In fact, a travois was mostly pulled by dogs carrying their belongings alongside kids. When the horses were introduced, they became their ultimate mode of transportation. While journeying by the river, they mostly constructed rafts and commuted on it.

The role of the horse

The horse played a significant role as it brought a revolution in their ways of life — the horses, acquired mostly by raiding other animals transformed these people into efficient warriors, also helping them in pulling bigger loads and hunting games with ease. Considered to be the finest of the horsemen, these animals became an integral part of their economy as a Kiowa’s wealth depended on the number of horses he had, and affluent people possessed about a hundred equines. Stealing horses from the enemy camp was a pride for the warriors. The animal was painted by a person of spiritual importance and then decorated using bead masks as well as horns of bisons.

They were creative people and their works of art comprised of paintings made from animal hide, as well as their numerous beadwork.

The institution of marriage was exogamous as nuptial ties with a kin were forbidden. Polygyny was mostly followed and people belonging to a respected position often had many wives. The concept of levirate where a man would marry the widow of his brother existed but was not a mandate. Horses were a precious gift to give in marriage. Divorce was also a common thing and a lady could be asked by her kin to end her ties, or the marriage would also come to an end in case of elopement on any side, though compensation was a must.

A person’s possessions were mostly destroyed post his death, while his horses would pass on to the brother or son of the deceased. 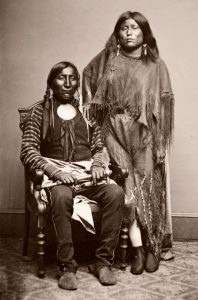 They respected the star, sun and other members of the constellation, alongside natural phenomenon like the cyclone. They even had high regard for the eagle, bison, and bear.

Of the various ceremonies performed by the Kiowa tribe, the sun dance was one of the significant rituals, conducted once in a year. Other rituals included the sweat lodge ceremony (which was about purification), vision quest ceremony, as well as the pipe ritual, where the Calumet was stuffed with tobacco and circulated among the participants.

The Kiowa Tribe of Oklahoma at Present

The wellbeing surrounding various aspects of their lives including industry, economy, business, health, and education has been taken care of the Kiowa Tribal Council. In modern times, people from this tribe have made their mark in various fields, establishing themselves as musicians, authors, photographers, composers, and bead artists.

The Suquamish are a Native American tribe that dwell on the Port Madison Indian Reservation, along the Kitsap Peninsula in the Puget Sound r

The Shawnee Indians of Oklahoma is one of the three Shawnee tribal groups which are federally recognized, the other two being the Eastern a