Published on September 26th 2016 by staff under Tribe Facts

The Cheyenne tribe, composing of two Native American tribes namely, the Sutaio or Suhtai, and the Tsitsistas, is hailed as one of the most prominent Great Plains tribe. Pronounced as “Shy-ANN” and spelled in different ways, the word Cheyenne is derived from the name “Sahiyenan” that is a Dakota Sioux name for the tribe. However, they call themselves by the name, “Tsitsistas” that can be translated variedly as “people alive,” “our people,” or “the people.” 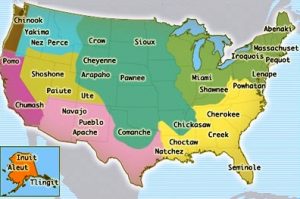 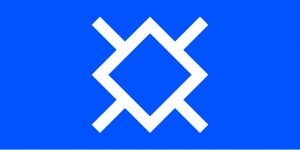 The tribe can be distinguished from other Plains Indians for having a much lighter skin tone.  Moreover, they are generally tall and have clear cut features.

The Cheyenne language that belongs to the larger Algonquian language group, is a musical one. Although, most speak English today, some older tribal people still use it. 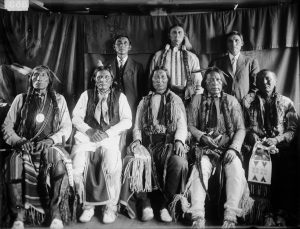 Where Did the Cheyenne Tribe Live

They formerly resided in the great lakes area of Minnesota and along the Missouri River. However, probably on account of conflict and competition with the Ojibure, Ree, and Mandan Indians, they initiated a westward migration in the late 1600s. It is believed that around 1700, they lived in the Black Hills of South Dakota. Finally, in 1832, the Cheyenne tribe divided into two groups namely the Northern Cheyenne that settled along the Platte River, and the Southern Cheyenne that dwelled along the Arkansas River further south in Colorado and Kansas.

Joining their neighbor, the Arapaho, the Southern Cheyenne formed a large tribe that occupied the territories of South Dakota, Wyoming, Nebraska, Colorado, and Kansas.

Formation of Their Reservation

When the white settlers entered their regions on the Oregon Trail, the Cheyenne were peaceful and even traded with them. However, with the onset of the Gold Rush in 1858 in Colorado, discontentment surfaced, and the natives and their allies responded by raids and attacks. Thus, started the Indian Wars (1857-1879) with some of the major battles waged being the Sand Creek Massacre (1864), the Colorado War, and the Battle of Little Big Horn. Finally, forced by the U.S government, both the Northern and Southern Cheyenne tribes had to move to a reservation in Oklahoma. Later, the Northern Cheyenne’s were relocated to a reservation in Montana.

The Northern Cheyenne and the Southern Cheyenne, forming two federally recognized nations of the same names, live in Oklahoma and Montana. 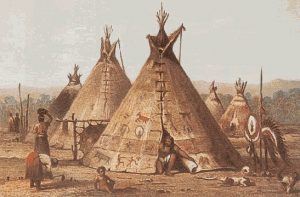 This Native American tribe lived as farmers, cultivating crops like squash, beans, and corn, also making pottery before migration. They also employed dog sleds and rafts as means of transport, residing in wigwams prepared from birch- bark and dirt or earth lodges. However, after they acquired horses from the Spanish, they gave up farming and became buffalo hunters, often trading animal hides in exchange for tobacco, fish or fruit. Adapting a nomadic existence, they naturally chose teepees for settling since these could be easily built or broken.

Today, teepees are only put up for fun and most live in modern houses. 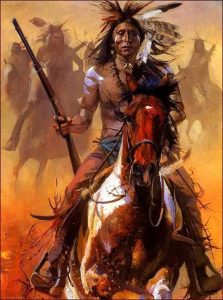 The Cheyenne distributed work by age and sex. Thus, young and old men had to take care of horses while the middle-aged ones conducted raids, hunted buffaloes and provided for the family. The responsibility of protecting the tribe and the honor of becoming the chief was also conferred only upon men.

Amidst women, the duty of carrying and rebuilding teepees, as well as gathering and making food was taken by the younger and middle-aged women, while aged women generally presided over the youngest members of the village.

Both genders participated in storytelling, hunting, and music. 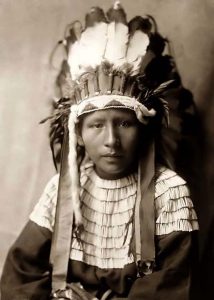 The Cheyenne clothing underwent several changes. The men initially wore breechcloths, leather leggings, and moccasins but switched over to plains war shirts commonly sported by the other Indians of the region. Similarly, the tall, feather headdresses put on by the Cheyenne Indian leaders were replaced by the long war bonnets of the Plains Indians. The clothing of women consisted of long buckskin dresses and high fringed boots. Their jewelry comprised of intricate necklaces and armbands. Much later, European costumes like cloth dresses and vests were adopted, and these were adorned with porcupine quills and fancy beading. 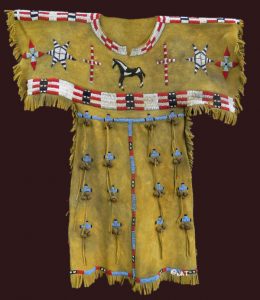 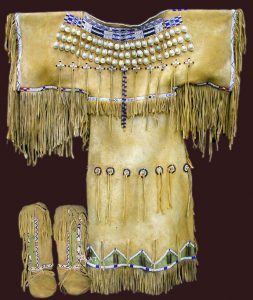 Before the acquisition of horses, when they were farmers, their diet consisted of buffalo or deer meat, corn, squash and beans. After leaving farming, they traded animal hides with other tribes to get fish, corn, tobacco and fruits. To overcome the scarcity of food in the harsh winter months, they traded cotton, hemp, and other medicinal plants with other tribes in exchange for food.

The Cheyenne tribe had an extended family that consisted of parents, children, and grandparents, all of whom stayed close together and shared economic resources.

Most of the tribal marriages were monogamous, and a young Cheyenne normally agreed to get married only after he had proved himself either by acquiring horses or securing a reputed position in war. As a result, courtship often carried on for years. 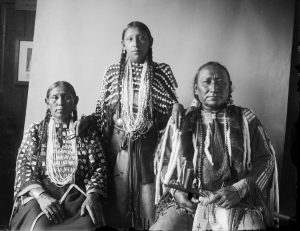 Powerful tools and arms like hoes and arrows made from animal bones as well as war clubs, spears and hide shields were employed by the Cheyenne warriors. 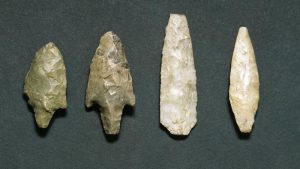 The Cheyenne men carved delicate wooden pipes, bows, and arrows. Other art and craft works involved quill embroidery, pottery, and beading. In fact, traditional artisans still practice beading. It is interesting to note that the flag of the Northern Cheyenne sports the Indian glyph of the “morning star,” a symbol that has been used in art by the natives for ages.

Religious Beliefs and Customs of the Cheyenne Tribe

These religious people held Ma’heo’o as the creator of both physical and spiritual life and the four sacred arrows as the most revered object. Among the events and accomplishments that these tribes celebrated through rituals, smoking of the ceremonial pipe, Calumet, was a custom that was greatly valued. As this pipe was used for sealing a peace treaty, it was referred to as a “Peace Pipe.” Traditional ceremonies like the Sun Dance, Animal Dance and Arrow Renewal are still recognized as sacred and private today.

The Cheyenne creation story recounts the formation of the world by the tribe’s Divine Being, Ma’heo’. Some of their myths and legends narrate the exploits of certain figures such as the spirit of thunder or “Nonoma,” or the spider trickster, “Wihio.” 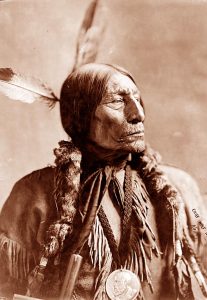 Earlier, besides crop cultivation, bison were employed to serve both as an important trade item and for manufacturing goods. Today, a significant portion of the Cheyenne income is based on the federal government. Government assistance is required by the tribes in their various activities such as ranching, cultivating alfalfa or wheat, and oil exploration.

While living in the Great Plains, the Cheyenne tribe was divided into ten bands. To keep these bands together, a Cheyenne prophet known as Sweet Medicine contrived the 44 Council, consisting of 40 headsman and four representatives. The council presided over the entire tribe and took a major part in taking decisions. Besides the council, there also existed a military society that mainly supervised law and order, and the Dog soldiers were the most prominent amongst them.

At present, the members of the Council are popularly elected, but they still follow a consensus. Each band maintains its government, laws, policies, and services.