Published on April 5th 2018 by staff under Tribe Facts

The Muckleshoot, with a population of more than 3ooo members, is one of the largest Native American tribes in Washington. The tribe has long absorbed people from the several Coastal Salish tribes inhabiting the region surrounding the Green and White Rivers as well as from other tribes.

Location of the Tribe at Present

The ancestors of the tribe, the Duwamish, and Upper Puyallup people lived near the Green and White rivers along the Central Puget Sound for centuries, but at present, the tribe resides on a 6 square mile reservation between Auburn and Enumclaw, in King and Pierce Counties. In fact, the tribe derives its name from the prairie on which the reservation exists rather than from what their ancestors were called.

Their traditional language was Whulshootseed, a local form of Lushootseed, but most of the members now use English.

The peaceful life of the tribe underwent a number of massive changes with the arrival of the European traders in the late 18th century and later the Americans. Along with losing a huge number of inmates to a fatal wave of epidemics, they had to face the loss of their territories as the non-natives began claiming the lands of the Puget Sound area for themselves. The signing of the Medicine Creek Treaty of 1854 by Washington Territorial Governor Isaac Stevens made no mention of the tribe and soon it was decided that they would be shifted to the Nisqually Reservation along the Nisqually river coast. The tribe allied with other local people and waged the Puget Sound Indian War (1855-56) as an attempt to recover their rights.

In 1856, the Muckleshoot Reservation was established with the support of Governor Stevens and in 1936, the constitution was granted under the Indian Reorganization Act. Over time, with the incorporation of other local tribes, the reservation has enlarged. And, as per enrolment rules, one must have one-eighth degree Muckleshoot blood to gain membership. 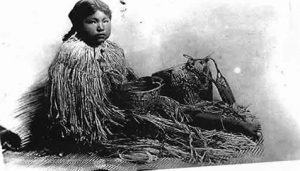 The two main vocations of the tribe during their stay in the White River valley were salmon fishing and hunting. They gathered salmon in summer after shifting to camps and joining the families of other tribes. In winter, they generally resided near watercourses and depended upon whatever they had stored. Besides, they also bartered smoked salmon and other commodities with the tribes of the Pacific Northwest as well as with those beyond the Cascade Mountains.

They were skilled in art and craft too and used steam bent cedar to make baskets, tools, and utensils. For clothing, furnishings, ropes, and mats they used cedar bark as raw material.

Their social structure was complex with divisions such as the nobility, middle class, and slaves and affluence served as the chief factor in determining leaders. The tribe often conducted marriages with Suquamish tribe members, as well as other groups of the Puget Sound to bind together ancestral Muckleshoot villages lying within and beyond the Duwamish watershed. They also resorted to feasts, ceremonies, commerce along with using a common territory. Actually, by having sway over a large area, they earned the rights to fish, hunt or carry on other occupations conveniently.

A number of their ceremonies centered on salmon and in one such called the “First‑Salmon Ceremony”, the members first shared the flesh of a spring chinook and afterward dropped its remnants in the same river from which it had been caught, believing that it would tell the other fishes of its good treatment. The custom, still practiced today, highlights how they respected the fish and do so even now since it has been the chief source of both food and work.

The tribe today strives to protect endangered salmon runs along with elk herds and other natural resources. The setting up of the Muckleshoot Tribal School and Muckleshoot Tribal College over the years, on the other hand, shows the tribe’s concern to promote education.

The governing body of the tribe is the Muckleshoot Tribal Council that consists of 9 members and is subjected to the General Council. The Western Washington Indian Agency takes the tribe under its jurisdiction and seeks to assist it to progress economically. For police services, the tribe contracts with the Sheriff’s Office of the King County.

Since 1995, the tribe’s involvement in varied projects of economic development has lead to the establishment of the Muckleshoot Mall, the Muckleshoot Casino, and the White River Amphitheatre, the proceeds from which have greatly assisted tribal programs.

In 1999, by providing nearly 1400 jobs to its members, the tribe earned the reputation of being the second largest employer in south-east King County. The same year, the tribe also contributed about $1.5 million to local charities and non-profit organizations.

Who are the Wampanoag The Wampanoag, meaning “Easterners” or “People of the First Light”, is an American Indian tribe that boasts o

Lumbee, a state-recognized Native American tribal group, is said to be the 9th largest of the North Carolinian tribes. Neither too primitive