Home > Tribe Facts > The Yanomami Tribe of the Amazon Rainforests

Published on August 17th 2016 by staff under Tribe Facts

The Yanomami tribal people, inhabiting the deep forests of Amazon in Brazil, boast of being the largest isolated tribe that presumably migrated across the Bering Straits nearly, 1,500 years ago. Comprising of about 200 to 250 villages, their population today is around 32,000. The word Yanomami, first adopted by anthropologist Napoleon Chagnon, means human beings.

The total Yanomami territory is the double of Switzerland in size, spread over a wide 9.6 million hectares. Populations in different regions primarily use the Yanomaman languages.

The tribe was referred to as warmongers by the Western European explorer, Alexander Humboldt, in the 18th century due to their frequent habits of waging wars, club fights, and raids against other tribes as well as their own members. However, violence is not the absolute reflection of their culture.

The Yanomami men are also horticulturists, making use of slash and burn cultivation, with hunting being another common occupation. They further employ shifting cultivation to avoid overused areas. Another vocation preventing these people from violence is trade, and mostly poisoned arrow tips are traded between villages. Yanomami boys start assisting their fathers in these works after a certain age.

The women mainly take charge of household duties that involve early morning expeditions to collect firewood and water, fruits, tubers, and nuts. They also grow plantains, and cassava as main crops along with sweet potato, sugar cane, corn and mangoes in garden plots for as long as the lands remain fertile. Children are looked after by their mother, with help from younger girls. 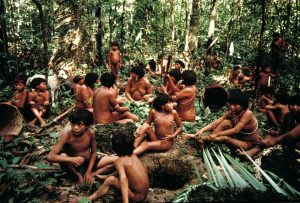 The Yanomami, one of the most ancient, culturally intact people, lead a distinct lifestyle with unique languages, beliefs and customs. They have an independent political system that does not involve following a single chief. Nonetheless, they have a village headman or tuxawa who solves disputes within and outside villages.

The people solemnly observe the religion of animism, the trait of investing plants and animals around them with animal spirits called the xapiripe. Using a hallucinogen known as yopo, one is empowered to make the spirits of animals and plants enter his own body to give him spiritual powers. They also believe in the concept of there being four layers of the cosmos.

They choose their shaman or medicine man from within their people, with men being the predominant choice for the job. A shaman has to relieve a person from his illness by pulling the spirit called hekura by using his own demons.

Endocannibalism, a burial ritual, calls for a dead person’s body to be covered in leaves and kept in the forest for about 35 to 40 days. After the insects have consumed the soft tissues, the bones are stored by the men in gourds. After one year, in another ceremony called reahu, they savor the ashes in the form of a soup. This ash eating is done to show respect and ensure that the pure soul reaches hedus, the Yanomami paradise. 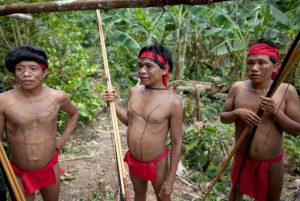 The men hunt and relish the meat of a variety of animals such as snakes, wild pigs, jaguars, monkeys, and armadillos. The women pursue frogs, crabs or caterpillars to use them in cooking.  One popular dish in their cuisine is a sort of flat cake made from maniocs.

These simple people unwind through a big feast that follows a good harvest. All the people from the nearby villages take part, eat the food and make merry. Women sing and dance to the tune of tribal music and also offer alcoholic drinks to men.

Their clothes reflect the social rankings of men. Men of higher rank wear fewer clothes and adorn themselves with more elaborate paints and headdresses in comparison to the ordinary ones, who love to assume colorful feathers of parrots, toucans, macaws or other tropical birds as jewelry. 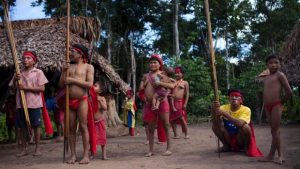 The increase in prenatal deaths and short lifespan make these tribal people wary of their future, and so they goad their daughters to have early marriages. Simultaneously marriage helps them to expand their connections through alliances. A girl is considered suitable for wedding soon after her first menstruation. Marriages are mostly polygamous.

Housing: The Yanomami tribe’s knowledge of architecture is visible from their construction of a huge oval shaped roof called shabono, using raw materials from the rainforest. Hammoks made of cotton are slung at night. However, shabonos are fragile, often succumbing against a heavy downpour, winds or insects.

Folk arts: Their graphic artistic skills are visible from the vivid black and red designs decorating objects like baskets, arrow points, and even their bare bodies. The Amazon tribe also dye baskets and their loin cloths by using a red berry called onoto.

Use of drugs: As mentioned earlier, the yanomami people use some hallucinogenic drugs like yakoana or ebene and yopo. The shaman prepares yopo in his garden by grinding numerous roots along with the the vine of ayahuasca. The most natural drug is tobacco which is chewed or sucked. 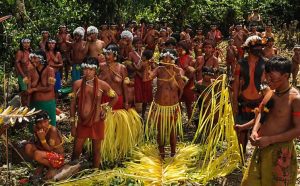 Controversies Regarding the Tribe in the Modern World

In 1967, geneticist James Neel and anthropologist Napoleon Chagnon took thousands of blood samples from the Yanomami Indians for doing biomedical research without their consent. The Yanomami shaman and spokesman, David Kopenwa demanded the blood to be returned. In May 2010, a declaration to return the blood samples to Amazon was made. This initiated a terrible international debate and led to the publication of the book Darkness in El Dorado by Patrick Tierney, in which he openly accused the scientists of genocide. A documentary film by Jose Padilha, called The Secrets of the Tribe, also deals with these allegations.

The discovery of gold in Yanomami lands in 1970 was another major threat to their existence as it both polluted the environment and also caused numerous deaths.

In November 1991, the native Yanomami area was reserved for the tribe by Brazilian President Fernando Collor de Mello. Yet intrusion and exploitation continue leading to more controversy and more debates.

The Future of the Tribe

The Brazilian NGO, CCPY helped build a Yanomami education project through which the people were educated, taught to read and write. Finally, the tribal people established an organization called Horonami in 2011, to protect their own rights.

The Cheyenne tribe, composing of two Native American tribes namely, the Sutaio or Suhtai, and the Tsitsistas, is hailed as one of the most p